I want to wish you and yours a very Happy Holidays and Happy New Year. Watch this video to find out about two things for your family to do on New Year’s Eve and New Year’s Day that are fun and free. 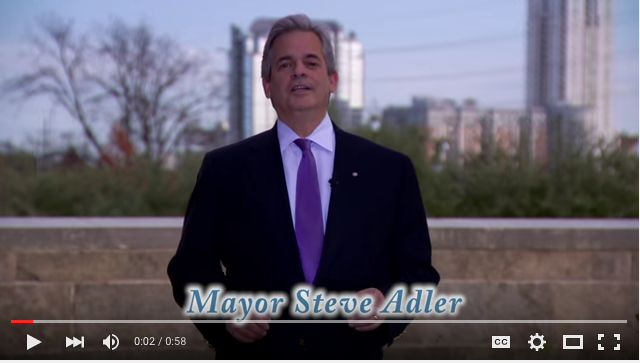 Also, I had a great time appearing in the role of Mother Ginger in Ballet Austin’s production of The Nutcracker on Monday. Diane and my daughters Sarah and Susan were in attendance to witness my ballet debut, and they assure me that I carried myself with the decorum befitting the occasion. END_OF_DOCUMENT_TOKEN_TO_BE_REPLACED

Here are four things I know for sure:

First, Austin is safer with ridesharing companies such as Uber and Lyft because they take drunk drivers off the streets and provide more transportation options, and I’m certainly not trying to get them to leave town.

Fourth, this is Austin, the city that reinvented the assembly line, country music, dinner-and-a-movie, and grocery stores. This is not an either/or city. We can find a creative solution that both allows Uber and Lyft to stay in Austin while at the same time protects women from sexual assault. Within the framework of safety incentives and benchmarks that the City Council approved on Thursday, I believe we can accomplish these goals.

END_OF_DOCUMENT_TOKEN_TO_BE_REPLACED

I wanted to catch you up on what we’ve been up to during the holidays.

We all know that IH-35 through downtown Austin is the worst road in town, and one of the worst in Texas. For years – decades even – the best advice we could give newcomers is how to get around Austin while avoiding IH-35. And as the years go by and more and more people move here, IH-35 gets more and more congested. All of a sudden, the road ahead looks a little better. Just this week, the President signed a new five-year highway bill that provides $305 billion for highways, transit, freight, Amtrak, and passenger rail programs. Even better, the bill, called the Fixing America’s Surface Transportation (“FAST”) Act, increases money available for highways and reserves a bigger portion of that funding for larger cities like Austin. In other words, right when Austin needs it the most, we are eligible for a bigger slice of a bigger pie for our biggest problem – IH-35.

END_OF_DOCUMENT_TOKEN_TO_BE_REPLACED

Happy Thanksgiving, everyone!  Diane and I are with our girls this week and it doesn’t get any better than that.  We hope you’re having a wonderful week as well.

If your family is like mine, we all take time during our Thanksgiving dinner first to express our gratitude for the blessings we enjoy. And then the family debates begin:  politics, boyfriends, the Dallas Cowboys’ personnel decisions, more politics – nothing is out of bounds!  But, there is one thing on which we’ll all agree this year: Traffic on IH-35 in downtown Austin is the worst.

As in, literally the worst. The Texas A&M Transportation Institute says IH-35 through downtown Austin is the most congested roadway in Texas, and we’re a pretty big state. We’re not the worst in the country, though. IH-35 in Austin is only the ninth-worst Thanksgiving traffic in the country according to  Google maps and the 10th-worst bottleneck in the country according to Transportation Secretary Anthony Foxx. By any measure, we’ve got a problem aching for solutions.

That’s the bad news. The good news is that we all agree that we need to do something about it. If congestion on IH-35 is the biggest, hairiest mobility problem we have in Austin, the shared community consensus that we need to deal with it is a blessing. There are many things people in Austin disagree on; this is not one of them.

Great cities do big things, and in the coming weeks and months you’re going to hear about ways to get traffic on IH-35 moving. Agreeing that we need to do something is an important step, but it’s only a step.

We’re already making some progress on IH-35. Last week I voted on CAMPO for much-needed improvements along IH-35 at Oltorf and at 51st Street. And I have challenged Austin businesses to reduce their employees’ commutes by 20% during peak hours, something we’ve already accomplished here at City Hall.  Senator Watson is providing important leadership at the State level even as I write.

These efforts, while useful, will not by themselves fix the traffic problem on IH-35 in Austin, but there is a silver lining. With all the things that your family might debate over Thanksgiving dinner, at least we can all agree that traffic on IH-35 has gotten so bad that we really do need to do something about it.  So, be thankful and pass the pie.

This is a quick note to report back to you on some exciting developments with our Housing Heroes Austin initiative to find homes for each of Austin’s homeless veterans by the end of the year. We’re not there yet, but we’re getting closer, and we’re going to finish this job!

At the beginning of the year, there were 234 homeless veterans in Austin. When I took up this challenge in May, there were 200 remaining without homes. By Veterans Day, we still needed 118 homes for these heroes. Since then, we have secured an additional 40 leases for homeless veterans! We’ve got 78 more to go and only a few weeks left in the year, but with your help we’re going to complete this mission.

You have already done so much. When I emailed last week, many of you offered up apartments and rental houses. Thank you! And we asked you to contribute money, and boy oh boy did you step up. Since Veterans Day, the Housing Heroes Austin Fund has raised an incredible $42,174.47. This kind of support is what makes Austin such a magical city. I can’t thank you enough, but I can ask for more help. If you have apartments you want to lease to homeless veterans or would like to make your own financial contribution, please click here or call the Mayor’s Office: (512) 978-2100.

People used to think that homeless veterans were an indelible feature on the modern cityscape, that this problem was too big to truly solve. Great cities do big things, and we can accomplish this together if we all do a little – though some of us have done a lot. I’ll be updating you as we get closer to meeting the deadline at the end of the year and asking again for your help. You could be the hero we’re looking for to help house these heroes.